Baseband back end and bunch-to-bunch coupling

…Being able to knock out a single bunch is very important for us. I have never really understood why it is OK to use a 250 MHz amplifier for knocking out a 500 MHz bunch.

Let's think about the process of single-bunch kick generation in time domain. We start with a 2 ns pulse with fairly fast rise and fall time (∼400 ps). Rise time of a baseband device with first-order RC response is

Amplifier with the 3 dB bandwidth of 250 MHz should have rise time of around 1.4 ns. That's a total of 1.46 ns, since rise times add quadratically.

Next we have the striplines. Response of 1 ns long stripline has rise and fall times of 2 ns - here is an illustration for 2 ns rectangular drive pulse: 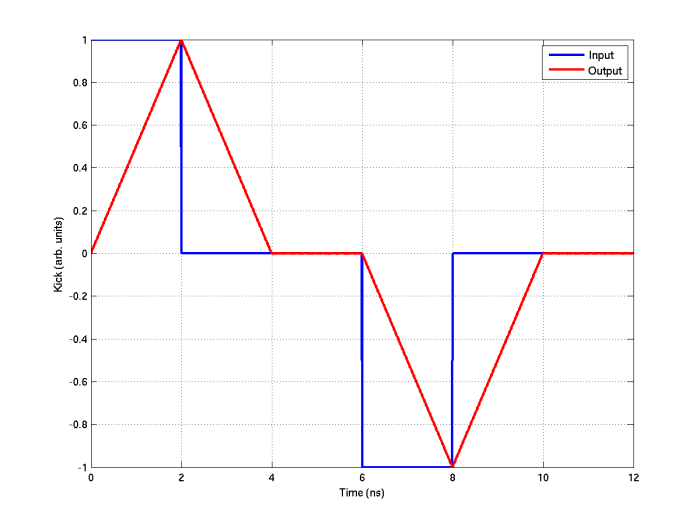 Total rise and fall times are

ns. For 2 ns bunch spacing, this back end setup does couple the neighboring bunches, with roughly 20 dB bunch-to-bunch isolation.

In practice, typical bunch-to-bunch isolation in the back-end when all is said and done is 12-20 dB. With 12 dB bunch cleaning gets pretty difficult. iGp12 has a few tricks to improve the performance even in these fairly tough situations. First of all, for cleaning out a bunch in the middle of the train, we turn off feedback for that bunch and turn on the excitation. The feedback is still on for the neighbors. As a result, excitation coupled in the back end is rejected by the feedback, consistently with the loop gain. Secondly, there is a three tap shaping filter in the iGp12 output. This filter allows one to pre-distort the amplifier drive so that bunch-to-bunch coupling is minimized. In recent commissioning at BESSY II we improved back-end isolation (bunch-to-bunch) from 12 dB to 18 dB with this method (and the optimization says it could be as good as 23 dB).

To summarize, you don't need 500 MHz of bandwidth. In fact, since rise times add quadratically, the main limitation is the stripline length. Pushing amplifier bandwidth from 250 to 400 MHz reduces overall rise time from 2.5 to 2.2 ns. Shorter striplines do help - at LNLS in Campinas the striplines are 500 ps long and we were able to kick out every fourth bucket from the uniformly filled ring without any excitation seen in the rest of the bunches. Using two amplifiers to drive the striplines differentially is also a good idea.